Listen to a reading of this article:

The Wall Street Journal has an article out titled “U.S. Aims to Thwart China’s Plan for Atlantic Base in Africa“, subtitled “An American delegation wants to convince Equatorial Guinea against giving Beijing a launchpad in waters the U.S. considers its backyard.”

The article quotes the former US Assistant Secretary of State for African Affairs Tibor Nagy saying “We’d really, really not like to see a Chinese facility” on the Atlantic, and discusses “American concern about China’s global expansionism and its pursuit of a permanent military presence on waters the U.S. considers home turf.”

The Quincy Institute’s Trita Parsi has discussed the irony of WSJ yelling about China’s “global expansionism” over a potential military base in Equatorial Guinea without applying that label to the US, when the US has hundreds of times the number of foreign military bases as China. Antiwar’s Daniel Larison wrote an article back in December eviscerating the ridiculous claim that a military base some six thousand nautical miles from the US coastline could be reasonably framed as any kind of threat to the American people.

But what really jumps out is the insane way the US political/media class routinely talks about virtually every location on this planet as though it is a territory of the United States. 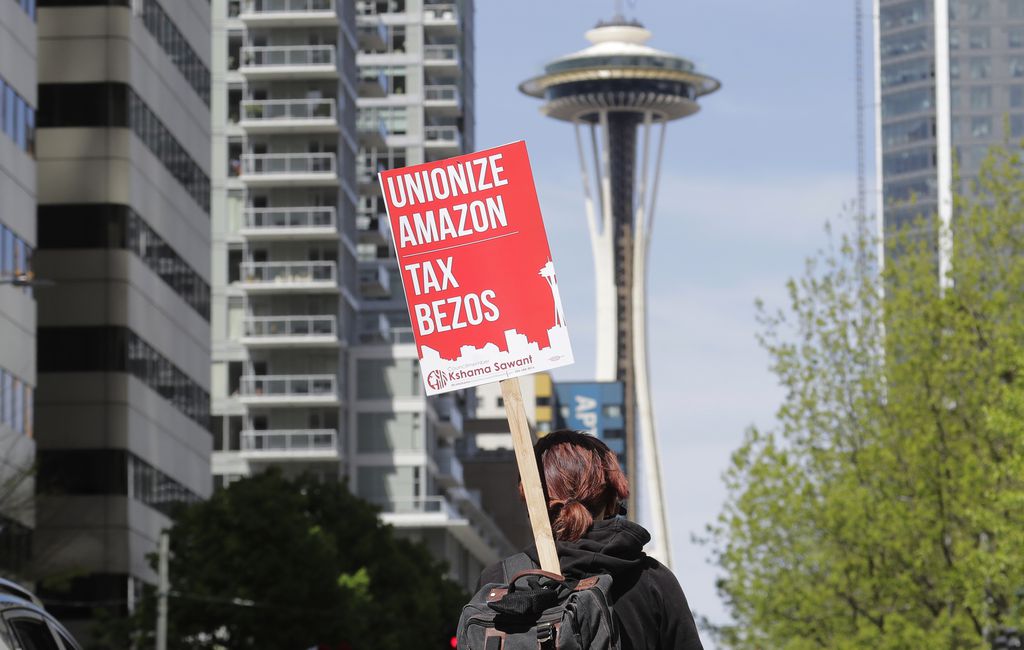 In this May 1, 2020, file photo, a protester carries a sign that reads “Unionize Amazon Tax Bezos,” in reference to Amazon founder and CEO Jeff Bezos, while riding a bike during a car-based protest at the Amazon Spheres in downtown Seattle. Mary’s Place, a family homeless shelter located nearby inside an Amazon corporate building on the tech giant’s Seattle campus, marks a major civic contribution bestowed by Amazon to the hometown it has rapidly transformed. But the Mary’s Place family homeless shelter also serves as a stark display of have-and-have-nots, given that some blame the tech giant’s explosive growth over the past decade for making living in Seattle too costly for a growing number of people. (AP Photo/Ted S. Warren)

I consider myself a good American with lots of international experience, seven years consulting in Italy, France and the UK; 15 years as vice president of product design and sales for a major software company involving set up and supervision of offices in more than 40 foreign countries.

Those are my international bona fides. I will now attempt to describe why the rest of the world sees the U.S. as a corrupt falling star.

The U.S. became world leader after much of European and Japanese infrastructure and youth were destroyed in World War II. No European I have met recently thinks that ranking is still justified. We no longer have the biggest economy. Based on purchasing power parity, China has surpassed us. We have the biggest external debt and the biggest current negative trade balance in the world. If the U.S. were an individual, we would be in debtor’s prison.

We should be No. 1. We have the most usable agricultural land in the world. We led the world’s industry for 75 years after World War II. We don’t have the largest population, but plenty of well-educated residents and lots of well-educated would-be immigrants. So, where do many Americans think we are No. 1 but the world thinks otherwise?

The greatest danger to American democracy right now is not coming from Russia, China, or North Korea. It is coming from the Republican Party.

Only 25 percent of voters self-identify as Republican, the GOP’s worst showing against Democrats since 2012 and sharply down since last November. But those who remain in the Party are far angrier, more ideological, more truth-denying, and more racist than Republicans who preceded them.

And so are the lawmakers who represent them.

Last Friday, 54 U.S. senators voted in favor of proceeding to debate a House-passed bill to establish a commission to investigate the causes and events of the January 6th insurrection. This was 6 votes short of the number of votes needed for “cloture,” or stopping debate – meaning any further consideration of the bill would have been filibustered by Republicans indefinitely.

So there will be no investigation.

In other words, 32% of American voters got to decide that the nation would not know about what happened to American democracy on January 6.

Furthermore, the 35 who voted against the commission were all Republicans. They did not want such an inquiry because it might jeopardize their chances of gaining a majority of the House or Senate in the 2022 midterm elections. They also wanted to stay in the good graces of Donald Trump, whose participation in that insurrection might have been more fully revealed.

Eight of these Republicans voted against certifying Joe Biden as president on January 6. Some of their constituents were responsible for the insurrection in the first place.

The Republican Party is also pursuing new laws in many states making it harder for likely Democrats to vote and opposing voting reforms in Congress.

It is actively purging any Republican who has temerity to criticize Trump. They have removed from her leadership position Liz Cheney, who called Trump’s efforts to overturn the election and his role in inciting the deadly Jan. 6 riot the greatest “betrayal by a president of the United States of his office and his oath to the Constitution.”

Local Republicans leaders have either stepped down or been forced out of their party positions for not supporting Trump’s baseless election claims or for criticizing the former president’s role in inciting the deadly Capitol riot.

American democracy is at an inflection point.

Senate Democrats must get rid of the filibuster and push through major reforms – voting rights, as well as policies that will enable more Americans in the bottom half – most of them without college educations, many of whom cling to the Republican Party – to do better.

In the 1930s, Franklin D. Roosevelt noted that the survival of American democracy depended on the adoption of policies that comprised the New Deal. In that Depression decade, democracy was under siege around the world, and dictators were on the rise.

Joe Biden understands that America and the world face a similar challenge. And like FDR, Biden is making a strong case that the adoption of his policies will buttress democracy against the forces of tyranny, not only as an example to the rest of the world but here at home.

So Rudyard Kipling’s arithmetic came to pass after all. ‘Strike hard who cares—shoot straight who can/ The odds are on the cheaper man.’ The U.S. has thrown in the towel. Another ‘superpower’ is set to depart Afghanistan. The symbolic date of September 11 is meant to have a ring of finality to it. It should: a trillion dollars later, the United States has failed in all its war aims.

Eschewing historical and scholarly knowledge, the U.S. invasion of Afghanistan was their first mistake. However impelled you feel to invade the fulcrum state, you should always count to ten. Some units entering the country will have passed Gandamak, where a British army was massacred in 1842. Few American soldiers will have noted the landmark.

North Korea is Back on the US Agenda

North Korea is rattling America’s cage again. It sent a reminder call when it recently fired off multiple short-range missiles after denouncing Washington for going forward with joint military exercises with South Korea. A few days later the DPRK (Democratic People’s Republic of Korea, the formal name for North Korea) launched two new tactical guided ballistic missiles, in defiance of a UN ban. Some experts say the ballistic missiles, which have a high degree of maneuverability, could potentially be fixed with nuclear or biological weapons and thus pose a new danger to South Korea.

My analysis is that the missile tests reflect North Korea’s impatience with the US to produce a negotiating position that isn’t a repeat of the usual US approach: you eliminate your nukes, then we’ll talk about rewards. The Biden administration reportedly has tried to contact Pyongyang about talks, but Kim Jong-un’s powerful sister, Kim Yo-jong, dismissed the idea, saying that if the Biden administration “wants to sleep in peace for the coming four years, it had better refrain from causing a stink.” The comment was widely interpreted here as a warning, but I contend her message was, “If you want to start talks, offer something different from sanctions, nuclear threats, and military exercises with South Korea.”

Kill Anything That Moves: The Real American War in Vietnam Revisited

…The greatest purveyor of violence in the world today: my own government.

Enough has been said, here and elsewhere, about the contents of the bestselling book Kill Anything That Moves: The Real American War in Vietnam (KATM) and the meticulous archival and field research on which it is based. It is a brilliant–a word I use sparingly–work about one of the most tragic periods in Vietnamese and US history. On the occasion of the 46th anniversary of the end of the US War in Vietnam, it’s worth revisiting the value of KATM’s singular contribution to the world’s knowledge about what the US did in and to Vietnam and its people.

In his spot-on review, Vietnam: A War on Civilians, Chase Madar sums up the war, as portrayed in KATM, thus: “The relentless violence against civilians was more than the activity of a few sociopaths: it was policy.” The same could be said of over 400 years of US history, both domestically and internationally, from 1607 to the present, especially for non-whites.

KATM, published eight years ago, is without a doubt the most emotionally wrenching book I have ever read. This might also have to do with the fact that the subject matter is intensely personal for me. I still have vivid recollections of many of the scenes author Nick Turse describes in excruciating detail. I am haunted by them.

The Biden administration may usher in a new period of reform, but history shows that it’s unlikely to last if our economic system remains intact.

To grasp the sheer magnitude of U.S. economic inequality in recent years, consider its two major stock market indices: the Standard and Poor (S&P) 500 and Nasdaq. Over the last 10 years, the values of shares listed on them grew spectacularly. The S&P 500 went from roughly 1,300 points to over 3,800 points, almost tripling. The Nasdaq index over the same period went from 2,800 points to 13,000 points, more than quadrupling. Times were good for the 10 percent of Americans who own 80 percent of stocks and bonds. In contrast, the real median weekly wage rose barely over 10 percent across the same 10-year period. The real federal minimum wage fell as inflation diminished its nominal $7.25 per hour, officially fixed and kept at that rate since 2009.

Massive Inequality Is a Feature of Capitalism, Not a Bug – In These Times

Rev. William Barber: The Fight for a $15 Minimum Wage Is a Fight for Racial Justice

Democrats need to stop playing games and use their majorities to pass a $15 minimum wage right now—we can’t wait any longer.

Rev. William Barber: The Fight for a $15 Minimum Wage Is a Fight for Racial Justice – In These Times

Can America’s Soul Be Saved?

You know that your country is caught in an endless loop of repetitive thinking when, almost 20 years after you invaded and occupied a distant land, beginning a war you’ve been incapable of winning despite massive “surges” of troops, contractors, CIA operatives, as well as air power, the Afghanistan Study Group, a congressionally mandated crew led by a retired Marine general who once commanded U.S. forces in that very land, recommends that the official date for the withdrawal of all American troops (but not planes, drones, or contractors), May 21st, be abandoned in the name of peace and the war fought on. (Consider that, by the way, a sentence worthy in length of such a never-ending war.)