In this free edition of the weekly Unauthorized Disclosure podcast, Matthew Hoh returns to the show. He’s a former Marine, whistleblower, and Green Party candidate for the US Senate in North Carolina.

Matthew provides an update on his Senate campaign. The Green Party was certified by the State Board of Elections, which means candidates may appear on the ballot in November. But the Democratic Party filed a lawsuit to stop the Green Party that was condemned by a major local newspaper.

Later in the show, Matthew reacts to Speaker Nancy Pelosi’s trip to Taiwan and also comments on the US drone strike against Al Qaeda leader Ayman al-Zawahiri and what that signified.

While many environmental advocates celebrate the Senate Democrats’ climate deal this week, frontline activists and more critical voices continue to note that the legislation, whatever its promises and upsides, remains an inadequate response to the global emergency that will likely further harm communities already affected by fossil fuel pollution.

The Senate approved the Inflation Reduction Act (IRA) in a party-line vote Sunday and it is expected to pass the Democratic-controlled House as soon as Friday.

Writing for Jacobin in the wake of the Senate vote, Branko Marcetic called for being “clear-eyed” about the package, adding that “the urge to smooth over the IRA’s serious flaws was understandable when its prospects of passing sat on a knife edge. But after passing the Senate, it’s now overcome its biggest hurdle.”

Despite the Democratic Party’s super-majorities in both houses of the legislature, CalCare (AB 1400), the California Guaranteed Health Care for All Act, was pulled on Monday, January 31, just before the Assembly floor vote, by its primary author, Assemblymember Ash Kalra.

He cited the need to gather more support from Democratic Assembly members as the reason, but his action denied voters the opportunity to learn where their representatives stand on the bill.

The fact that the majority of California Democratic Assemblymembers do not support a single-payer system when the vast majority of their constituents do is inexcusable.

“Not only would I sign AB 1400 if it came to my desk, but I would use my influence with the California legislature to pass it in the first place. We must fix democracy if we want universal health care for the people,” said Luis Rodriguez, Green candidate for Governor.

Working-class families are faced with an extra burden as the new year begins – the expiration of the expanded child tax credit. The expansion provided support for families struggling during the pandemic by changing some key factors of the already existing credit. Namely, the expansion increased the annual amount per child from $2,000 to between $3,000 and $3,600, it paid the credit in monthly installments rather than in one lump sum, and it expanded the full benefits of the credit to families who previously had been ruled ineligible due to their income being too low.

On the same day that the CTC expansion expired, there were almost 450,000 new COVID cases reported, almost double the number reported at the same time in 2021. The 7-day average was over 380,000 cases per day. The expiration of the CTC is just the latest in a wave of COVID protections that have been allowed to end, despite the fact that the pandemic is worse than ever. The Paycheck Protection program ended in March of last year, enhanced unemployment benefits ended in September, the federal eviction moratorium expired over the summer, and we haven’t received a stimulus check since the spring of 2021.

There was an attempt to make the CTC permanent as part of Biden’s proposed social program budget, as supporters of the expansion had been hoping from its inception. In the six months since the expansion started it kept almost 4 million children out of poverty, reducing the child poverty rate by almost 30% and providing much needed aid to millions of families. However, just like how the social program budget started out with provisions that would provide funding for clean energy, free community college, paid family and sick leave and tax increases on the hyper-wealthy and corporations that were all eventually removed or drastically reduced, right-wing Democrats have stood in the way of the CTC expansion as well.

Joe Manchin in particular is responsible for killing the CTC extension, citing racist and elitist “concerns” about what families will use the money for, along with the entirety of the social program budget. Research has shown that the CTC extension has reduced child poverty and food insecurity, and that in a time where the system is failing left and right to protect and provide for working-class people, recipients of the tax credit used it to buy food, pay rent and other bills, pay for childcare, buy clothes, create savings and pay down debt. These are all necessities that should be provided to everyone, and while the child tax credit was nowhere close to the full scope of social support that’s needed, it provided an invaluable safety net for families across the country that has now been ripped away.

Despite having control of the House, Senate and presidency, the Democrats have failed at every turn to adequately handle the COVID-19 pandemic. They have repeatedly capitulated to right-wing forces within their own party that stand opposed to instituting, or even continuing, the most meager social benefit programs. They could use their power and influence to apply pressure to Manchin, Kyrsten Sinema, and other right-wing Democrats who so clearly and blatantly work to obstruct any legislation that would benefit the working class. Instead, Biden and the Democratic Party shrink their proposed bills, remove key elements, and chip away at reforms that working class people desperately need in an attempt to find “common ground.”

By allowing Manchin and others to do away with the most progressive elements of the social program budget, by allowing corporate greed and interests to supersede the needs and wellbeing of the people, by allowing themselves to be controlled by the furthest right members of the party, the Democrats have once again failed the same working class people they claim to represent. They have put themselves in a position where they are unable to pass any but the most limited reforms. COVID cases are at an all-time high across the country, millions of people have gotten sick, and yet the Democrats have let the relief programs that were in place expire, and have failed to implement anything meaningful in their place, leaving millions of struggling people vulnerable to food insecurity, housing instability, serious illness and more.

The expiration of the child tax credit makes the failure of the Democratic Party painfully clear. We need a new system, one that prioritizes human need over the profits of corporations, and cannot be held hostage by the whims of an individual.

“The longer we wait, the more limited the impact of the reforms are.” 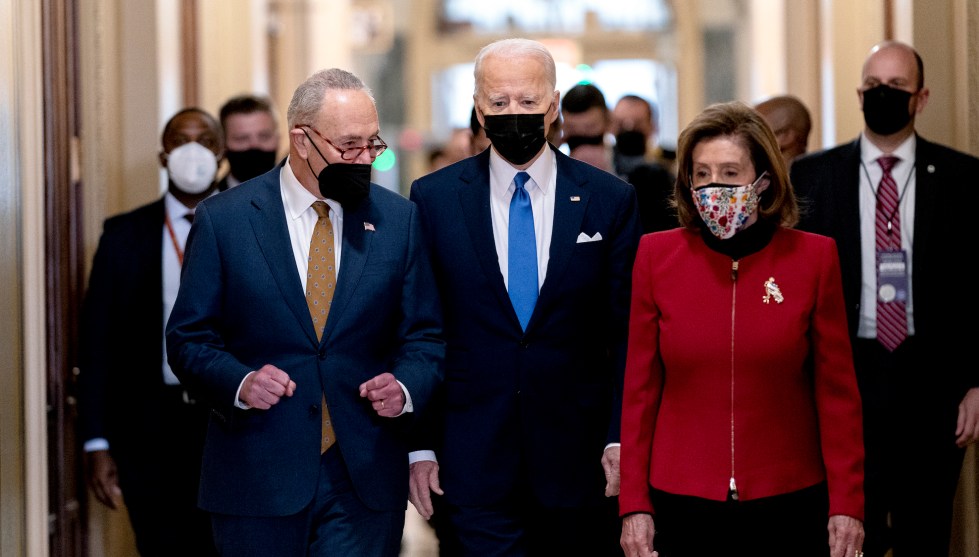 At crucial moments in American history when democracy was under threat, Congress took decisive action to protect voting rights—the 15th Amendment, the 19th Amendment, the Voting Rights Act of 1965.

This week is going to be a similarly pivotal time for American democracy. After failing to lawfully win the 2020 election and then unlawfully overturn it, the Republican Party has had a single-minded focus on rigging the country’s voting and election system to their advantage, while congressional Democrats have passed no legislation to stop them.

Democrats have struggled to deliver on their progressive promises—even ones that are wildly popular—but voters don’t have to wait for the upcoming midterm elections to push them to follow through.

Even with majorities in both the House and Senate, conservative Democrats fought and removed parts of the Build Back Better plan that were wildly popular with voters—voters who elected Democrats expecting them to deliver things like paid leave, universal pre-K, and expanded Medicare coverage. As those voters continue to face real struggles, what options do they have when their representatives won’t even defend their agenda against members of their own party?

On this episode of The Marc Steiner Show, longtime labor organizer Bill Fletcher Jr. and Jacobin staff writer Luke Savage discuss how voters need to organize and counterattack with litigation, ballot initiatives, and mass action to confront voter suppression and gerrymandering, and pressure Democrats into action—and not just wait until midterm elections “for the meteor to hit.”

As Texas Democrats flee to DC to lobby for voting bills, advocates wish the president would take a stronger stand. 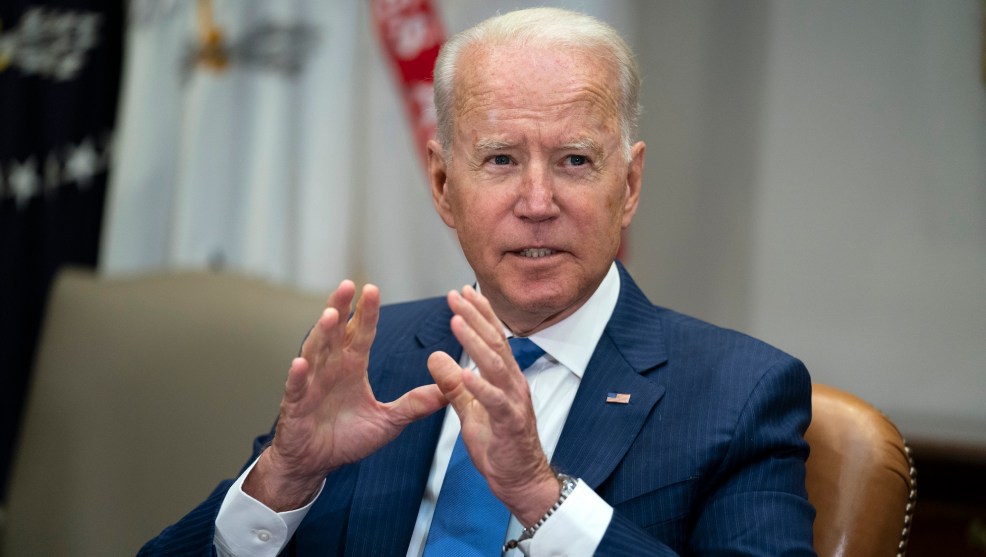 President Joe Biden speaks during a meeting in the Roosevelt Room of the White House, July 12, 2021, in Washington. Evan Vucci/AP

Texas House Democrats fled the state on Monday to block Republicans from passing a sweeping voter suppression bill and traveled to Washington, DC, to lobby their congressional counterparts to pass federal legislation protecting voting rights. “We are living on borrowed time in Texas,” Texas Democratic leaders said in a statement. “We need Congress to act now…to protect Texans—and all Americans—from the Trump Republicans’ nationwide war on democracy.”

Now they want the White House to act with the same urgency.

In a speech on Thursday, Vice President Kamala Harris called voting rights “the fight of our lifetime.” President Biden plans to deliver a major speech in Philadelphia on Tuesday denouncing GOP efforts to make it harder to vote, which White House Press Secretary Jen Psaki on Monday called “the worst challenge to our democracy since the Civil War.”

Yet voting rights advocates say the White House’s rhetoric about the existential threat to democracy has not been matched by action to solve the problem. Biden, they complain, has been much more engaged in trying to pass an infrastructure plan than in trying to persuade Senate Democrats to pass the For the People Act, the sweeping voting rights measure that was blocked by a GOP filibuster last month.

Biden is Better, but…

Twelve years ago when Barack Obama was the incoming President, he declared, “We are a nation of Christians, and Muslims, Jews and Hindus—and nonbelievers.” It was the first time any President had used his inaugural address to affirm that secular people were a welcome part of the nation. Since then, the secular part of our nation has grown substantially, especially the younger generations.

Rob Kall Bottom-up Show | 1.38K subscribers
Thom Hartmann is a progressive national and internationally syndicated talk show host, described by Talkers magazine as America’s most important progressive host and one of the top ten radio shows in the country every year for over a decade. He is also a New York Times bestselling author of dozens of books.

The Grand Old Party, founded in 1854 in Ripon, Wisconsin, is now dead. What’s left is a dwindling number of elected officials who have stood up to Trump but are now being purged. Even Senate Minority Leader Mitch McConnell’s popularity has dropped 29 points among Kentucky Republicans since he broke with Trump.