Peace advocates on Thursday said that the near-unanimous vote by United Nations member states to demand an end to the US economic embargo of Cuba underscores the imperative for the Biden administration to lift the crippling 60-year blockade.

For the 30th straight year, UN General Assembly members voted in favor of a Cuban resolution condemning the embargo, first enacted during the administration of then-President John F. Kennedy, who according to close confidant and historian Arthur M. Schlesinger Jr., wanted to unleash “the terrors of the Earth” on Cuba following Fidel Castro’s successful overthrow of a brutal U.S.-backed dictatorship.

Thursday’s vote was 185-2, with only the United States and Israel dissenting, and Ukraine and Brazil abstaining.

“The Biden administration talks about the need for a rules-based international order. Today’s UN vote clearly shows that the global community is calling on the US to lift its brutal embargo on Cuba,” CodePink cofounder Medea Benjamin said in a statement.

On COI #343, Kyle Anzalone discusses progressives in Congress supporting the war in Ukraine.

Moves by the Biden administration to include Israel in the US Visa Waiver Program validate Israel’s racist policies.

In 2021, President Joe Biden hosted Israeli Prime Minister Naftali Bennett at the White House amidst a public protest outside organized by American Muslims for Palestine and others. One of the most alarming items on the agenda discussed in a side meeting between Secretary of State Antony Blinken and Bennett was the proposition to include Israel in America’s Visa Waiver Program. This would mean that US and Israeli citizens traveling between the US and Israel wouldn’t need visas to enter either country. Now, outgoing Israeli Ambassador to the US Gilad Erdan claims that Israel will join the US Visa Waiver Program by mid-2022.

While this move might seem benign or inconsequential, it would actually solidify Israel’s discriminatory and racist entry policies toward US citizens.

It is worth noting that the concept of “citizenship” in the US, Israel, and globally is weaponized and access to it is used to exclude and demonize groups of people usually from the Global South. We must scrutinize the notion of citizenship and reflect on what defines an immigrant, refugee, or citizen, as well as how all these categories are themselves highly politicized categories.

Since the Israeli/Palestinian ceasefire began this week, the Biden administration’s refrain has been that Israelis and Palestinians should have “equal measures of security, peace, and dignity,” but not a word about equal rights.

The administration’s silence on Palestinian rights is an affirmation of the Israel’s apartheid policies, which deny Palestinians equal citizenship, restrict their movement, and dispossess them of their homes and land.

The cease fire came despite the Biden administration, not because of it. Biden’s UN Ambassador, Linda Thomas-Greenfield, gave Israel the greenlight to continue bombing Gaza three times by repeatedly blocking UN Security Council resolutions calling for a ceasefire.

Biden’s unconditional support for Israel’s expansionist colonial policies was underscored in the first weeks of his administration by his decision to affirm Trump’s move of the US embassy from Tel Aviv to the Israeli-occupied territory of Jerusalem prior to a negotiated solution to the Arab/Israeli conflict.

Biden’s unconditional support for Israeli policies was reaffirmed when he approved the sale of $735 million in precision-guided weapons to Israel in the middle of the recent Israeli/Gaza war.

The ceasefire came as we approached the anniversary of George Floyd’s murder at the hands of the police, an event that sparked the global Black Lives Matter uprising against police brutality. Now the world is outraged by Israel’s militarized policing of Palestinians.

Even as the ceasefire between Israel and Gaza was beginning, militarized Israeli police continued to wage a campaign of fear and intimidation against Palestinians inside Israel’s own borders.

Israeli authorities continue the ethnic cleansing of Palestinians from the East Jerusalem neighborhood of Sheikh Jarrah, one of the precipitating causes of the Israel/Gaza war. At Friday prayers last week, Israeli security forces again used stun grenades and rubber bullets against Palestinian worshippers outside the Al Aqsa mosque in Jerusalem where earlier attacks on worshippers helped provoke the war.

Israeli security is now making mass arrests of Palestinians in Israel who took part in protests and defended their neighbourhoods from assaults by right-wing Israelis. Israeli Arabs face new police checkpoints and spying by plain clothes cops, while police stand by and allow racist anti-Arab gangs of Israelis to assault Palestinians. Israeli police have used violence and nighttime raids against Palestinians in mixed cities like Haifa, Jaffa, and Lod, where there has been unprecedented inter-ethnic violence between Israeli Jews and Arabs in recent weeks.

What is striking about Palestinian resistance in this recent conflict is the degree of solidarity among Palestinians across Gaza, Israel, and the West Bank. In protest against the Israeli campaign in Gaza, Palestinians staged a broadly-supported general strike on May 18 across Israel and the occupied territories. The Israel Builders Association said that only 150 of the 65,000 Palestinian construction workers showed up for work.

In the United States we must demonstrate our solidarity with the Palestinian struggle for human rights by demanding an end to U.S. taxpayer-funded aid to the Israeli military. Since World War Two, Israel has been the largest overall recipient of US foreign aid. In 2016 President Obama signed a $38 billion 10-year military aid package. U.S. tax dollars are helping Israel to develop one of the most advanced militaries in the world and to purchase sophisticated military equipment from the United States.

We urge participation in the National March for Palestine in Washington, D.C., on Saturday, May 29, from 3:00 to 8:00 pm. The march is called by a broad coalition of pro-Palestinian organizations who are have initiated a new campagin to #SanctionIsrael. 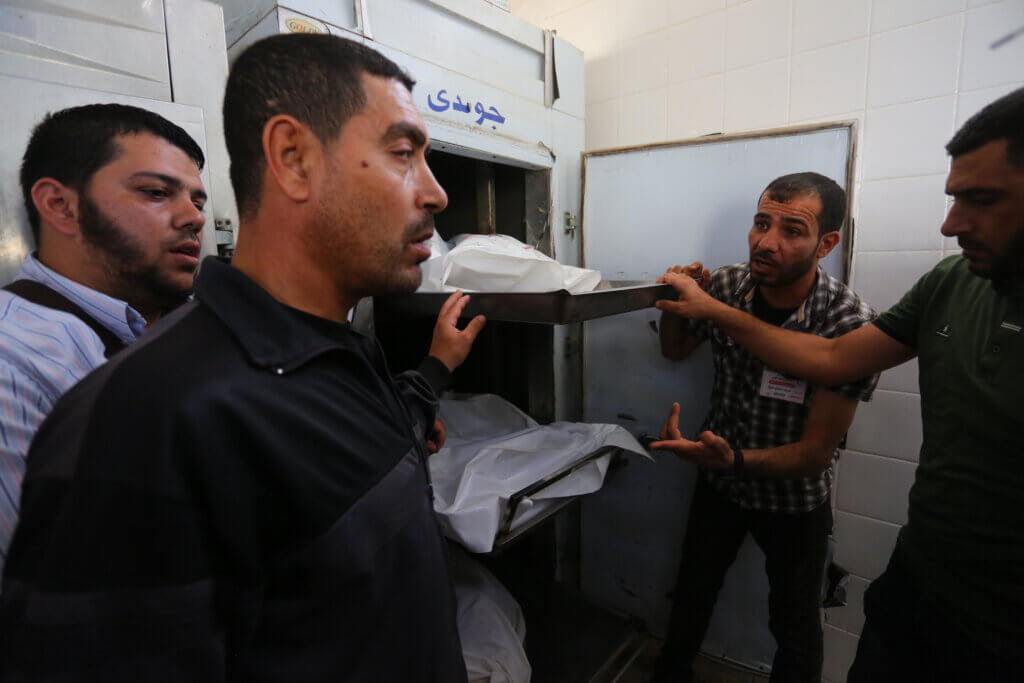 PALESTINIANS MOURN OVER BODIES OF SALHA FAMILY WHO WERE KILLED AFTER ISRAELI AIR STRIKE IN DEIR AL-BALAH IN THE CENTER OF GAZA STRIP, ON 19 MAY 2021. PHOTO BY ASHRAF AMRA. (C) APA IMAGES.

Amira Hass is one of the most impressive and experienced journalists in Israel/Palestine. She writes for the respected daily Haaretz, where on May 19 she made an extraordinary charge — that the Israeli military, as part of its air assault on Gaza, “is wiping out entire Palestinian families on purpose.”

So far, no mainstream U.S. media outlet has followed up on her report. Their failure is journalistic malpractice.

Hass, the daughter of Holocaust survivors, actually lived in Gaza from 1993-97, and afterward published the valuable Drinking the Sea in Gaza (1999). She obviously still has excellent contacts there. This latest report starts by observing that 15 Palestinian families in Gaza lost multiple family members during the Israeli bombardment:

Parents and children, babies, grandparents, siblings and nephews and nieces died together when Israel bombed their homes which collapsed over them. Insofar as is known, no advance warning was given so they could evacuate the targeted houses.

Hass contrasted this lack of warning with Israel’s policy toward the high-rise towers in Gaza, where the military did phone residents an hour or so in advance, directing them to evacuate. She then reported an almost unbelievable fact: the Israeli army and the Shin Bet intelligence service actually “have current phone numbers for people in each structure slated for destruction.” Under the Oslo Accords, the Gazan authorities are required to give the Palestinian population registry to the Israeli Interior Ministry. In what must be an unprecedented (and sickening) new feature of war, Israel’s army “knows the number and names of children, women and elderly who live in any residential building it bombs for any reason.”

She speculated that the Israeli military targets residences that it alleges have some connection to Hamas, “even if all it had was a telephone, or just hosted a meeting.” She concluded that to the Israel military:

. . . once the “importance” of a Hamas member is considered high and its residence is defined as a legitimate target for bombing — the “allowable” collateral damage, in other words the number of uninvolved people killed, including women and children — is very broad.

Amira Hass’s article cries out for follow up reporting by U.S. journalists. Now that the ceasefire is in place, The New York Times, for instance, could ask Iyad Abuheweila, its courageous man in Gaza, to visit the ruins of the abu al Ouf family home, where the father, Ayman, an internal medicine doctor, died, along with 12 of his relatives. Hass named all 12 victims, who ranged in age from 9-year-old Mir to Amin, aged 90. (Abuheweila’s own harrowing first-hand account in today’s paper further undermines Israel’s assertion that it aimed only at military targets.) Times reporters in Israel could work their sources inside the military, to seek clarification and justification for knowingly destroying entire families. The paper could also interview professors and legal scholars who study the ethics of warfare, and ask them to opine on “allowable collateral damage.”

So far, nothing. Instead, the lead story in today’s paper says that “the primary target” of “the Israeli aerial and artillery campaign” has been “Hamas’s extensive network of tunnels for moving fighters and munitions, and Israel has also sought to kill Hamas leaders and fighters.”

by Michael Winship and Angela Godfrey-Goldstein

What have your days been like while all of this has been going on?

The mornings are the worst. I wake up groggy. Within an hour I have to decide what to focus on, when all hell is generally letting loose – armed militias on the streets, especially in Palestinian parts of East Jerusalem, and Gaza being pulped. Two nights ago, I slept only an hour, woken by incessant warplanes flying in formation – they’re using F-15s and F-16s. Then you start thinking of them dropping payloads, gifts of death. One guy on a Zoom call of about 70 Israeli and Palestinian peace organizations the other day just lost eight members of his family but kept working – only mentioning it at the end of the call.

There’s analysis to read, focusing on what to share as advocacy resources. Twitter jumping. Stats of the dead. Friends asking how I am. There’s a horrible feeling among peace activists and other Israelis that it’s all falling apart. Dark, dangerous spirits and genies deliberately have been let out of the bottle (real neo-fascists) and no confirmation it can ever go back.

Police violence is more brutal everywhere, giving the distinct impression that this “round of fighting” (a euphemism for genocide?) was deliberately provoked, with [Israeli prime minister] Bibi Netanyahu seen by so many analysts and even members of his party, Likud, as having a vested interest in declaring war on Gaza and the Palestinians of East Jerusalem. Why were the police so harsh? So damned undisciplined? So racist?

Huge damage has been done to prospects for co-existence. Palestinian Israelis are 20% of the population, they’re our fellow citizens and our policies are radicalizing them, while 340,000 Palestinians in East Jerusalem live with almost no civil rights at all – including no one to vote for. The rest of the Occupied Palestinian Territories [OPT] also are without any statehood — 300,000, for example, live in Area C under Israeli military control in what for many, many years now we’ve been saying is an apartheid reality. Now Human Rights Watch and B’Tselem are saying it, too. So, in the early part of the day, it’s a question of trying to stay calm and not panic. Trying to find what’s essential, not get distracted or want to retreat into reading irrelevant stuff in the papers. Or spending time on Google Streetview somewhere in the Sussex countryside or searching for our old home in Mbabane, Swaziland, as an escape!