Rep. Lauren Boebert (R-CO) was caught on camera boasting of taunting Rep. Ilhan Omar (D-MN) that she is a terrorist.

The taunt was ironic given that Hunter Walker at Rolling Stone reported that Boebert was one of a handful of representatives on the Hill who repeatedly met with conspirators planning the January 6, 2021, Capitol Insurrection in which angry armed mobs invaded the halls of Congress chanting “hang Mike Pence” and seeking to harm legislators.

Walker said of his two two top sources within the insurrectionists, “Rolling Stone has separately obtained documentary evidence that both sources were in contact with [Arizona Rep. Paul] Gosar and Boebert on Jan. 6.”

On Jan. 6! That is, while the insurrection was taking place!

That is, Boebert is the one with terrorist ties.

Rep. Omar is a refugee from the violence of warlords and terrorists in Somalia who came to the U.S. as a girl and rose to become a congresswoman because of her devotion to her new country and the trust she gained among her constituents that she would carefully steward their interests. Hers is a quintessential American story. Seven of the thirty-nine signers of the U.S. Constitution were foreign-born, one in the West Indies. For Rep. Omar to be tagged unjustly with the very violence that drove her from her homeland as a child must be deeply upsetting.

Boebert, addressing a small group of constituents in a living room, told a story (which Rep. Omar contests) that she was getting into an elevator in the Capitol when a policeman came running toward her with alarm on his face. Puzzled, she looked around and saw that Rep. Omar was in it with her. She alleged that she reassured the policeman that Omar did not have a backpack and so it was probably safe. She said that she then used the phrase “jihad squad.”

Two sources are communicating with House investigators and detailed a stunning series of allegations to Rolling Stone, including a promise of a “blanket pardon” from the Oval Office

As the House investigation into the Jan. 6 attack heats up, some of the planners of the pro-Trump rallies that took place in Washington, D.C., have begun communicating with congressional investigators and sharing new information about what happened when the former president’s supporters stormed the U.S. Capitol. Two of these people have spoken to Rolling Stone extensively in recent weeks and detailed explosive allegations that multiple members of Congress were intimately involved in planning both Trump’s efforts to overturn his election loss and the Jan. 6 events that turned violent.

Rolling Stone separately confirmed a third person involved in the main Jan. 6 rally in D.C. has communicated with the committee. This is the first report that the committee is hearing major new allegations from potential cooperating witnesses. While there have been prior indications that members of Congress were involved, this is also the first account detailing their purported role and its scope. The two sources also claim they interacted with members of Trump’s team, including former White House Chief of Staff Mark Meadows, who they describe as having had an opportunity to prevent the violence.

The two sources, both of whom have been granted anonymity due to the ongoing investigation, describe participating in “dozens” of planning briefings ahead of that day when Trump supporters broke into the Capitol as his election loss to President Joe Biden was being certified.

“I remember Marjorie Taylor Greene specifically,” the organizer says. “I remember talking to probably close to a dozen other members at one point or another or their staffs.”

For the sake of clarity, we will refer to one of the sources as a rally organizer and the other as a planner. Rolling Stone has confirmed that both sources were involved in organizing the main event aimed at objecting to the electoral certification, which took place at the White House Ellipse on Jan. 6. Trump spoke at that rally and encouraged his supporters to march to the Capitol. Some members of the audience at the Ellipse began walking the mile and a half to the Capitol as Trump gave his speech. The barricades were stormed minutes before the former president concluded his remarks.

These two sources also helped plan a series of demonstrations that took place in multiple states around the country in the weeks between the election and the storming of the Capitol. According to these sources, multiple people associated with the March for Trump and Stop the Steal events that took place during this period communicated with members of Congress throughout this process. 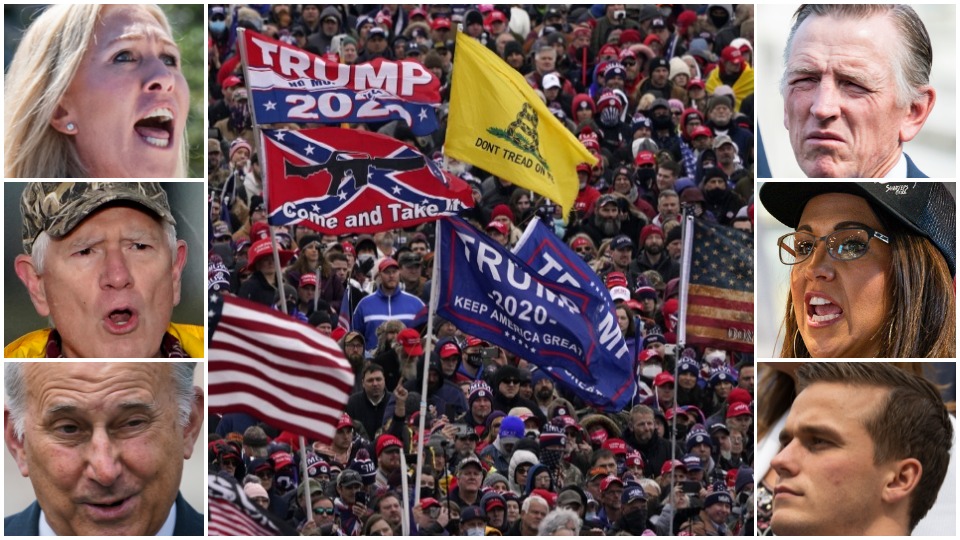 Rep. Lauren Boebert (R-CO) unfurled a thermal blanket during President Joe Biden’s congressional address to draw attention to the surge of migrants at the southern border, but her stunt backfired.

The silver blanket was similar to those distributed to migrants held in detention facilities, and Boebert tweeted about the border situation during Biden’s address to Congress — but her demonstration mystified and irritated many observers.

The controversial audit of Maricopa County votes in Arizona has been widely panned for lacking legitimacy, but former President Donald Trump is reportedly fixated on the political theater — even though it may backfire on Republicans.

“More than five months after the 2020 presidential election, and after numerous failed attempts to overturn the results, former president Donald Trump has seized on a new avenue to try to call the outcome into question: a hand recount of 2.1 million ballots cast in Arizona’s largest county. Several advisers said the former president has become fixated on the unorthodox process underway in Phoenix, where the GOP-led state Senate took ballots and voting equipment from Maricopa County and turned them over to Cyber Ninjas, a private contractor whose chief executive has echoed claims that the election was fraudulent but has now promised a fair review of the November results,” The Washington Post reported Thursday.

Trump fans Dion Cini and Cliff Gephart held their pro-Trump boat parade earlier this month in Tampa, Florida, and they plan to take their parades nationwide, with more events planned for San Diego, Cleveland, and Las Vegas, according to the “Trumparilla” Facebook page.

According to Mother Jones’ Ali Breland, Cini yelled the phrase as he was being recognized from the stage by Gephart for his efforts to organize the event.