“Where in God’s name is our backbone?” Joe Biden asks.

It should be in congress and the Justice division of government

But Republican legislators sell their souls and lie as part of their jobs, to keep their jobs. And now it is almost a uniform truth that, all Republicans have enabled gun sellers to flood the nation with automatic weapons. Even the anti-Trump Republicans, who the Republican party now reviles, are guilty. They have blood on their hands.

Take Texas fascist idiot Greg Abbot, who has bragged about the number of gun owners in Texas. He says that this shooting was , incomprehensible. INCOMPREHENSIBLE? What a lying, despicable f*cking blood-on-his-hands idiot. His name should be mentioned as a guilty party at every funeral for the 21 victims.

Ted Cruz, one of the smartest idiots in congress, who, predictably offered his thoughts and prayers, suggested that people would take advantage of this and politicize this. Damn. I can’t even type these words without gritting my teeth in disgust. His very words are political. Even saying “thoughts and prayers,” has become a fraudulent shield for bloodstained hands politics. 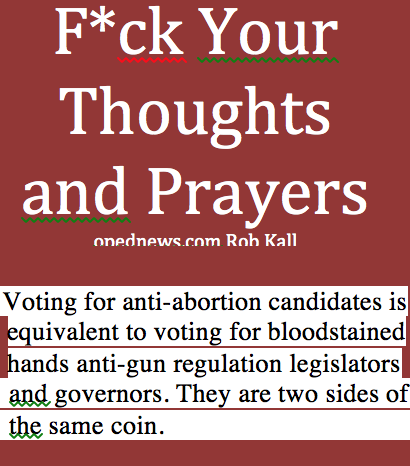 Sadly, I’ve written those words before. Vote for Republicans and YOU have blood on your hands. YOU.

There are some Republicans with the most blame– elected legislators, the Supreme Court justices. Clarence Thomas, the senior justice, has perhaps the most blame. When he dies, and rots in hell and his gravestone needs routine urine removal maintenance, he should be remembered and reviled for his constant and predictable support for unrestricted gun sales, as well as his defecation on justice, the constitution and human rights.

Blame the small penis gun owners who put stickers on their pick-up trucks advocating for the Second Amendment.

And let’s be clear. These are mostly white Christian European males who keep enabling the murders of so many children, who support the media and messaging that unleashes deranged gunmen. These are the pathetic losers who embrace replacement theory.

If you are not feeling outrage now, you are a part of the problem. There is blood on. your hands. I realize that most of the readers of this article agree with me. But we need to confront the Republicans we know and make it clear to them that we know. They too have blood on their hands.

Even the Justice Department has blood on its hands. It should be much more aggressively going after child-killing enabling laws. And the goal should be to make the Supreme Court take a stand or show what lying, despicable shills the six Republican Justices for the murder enablers they are.

So you better believe I am pissed and disgusted. Heaven pity and Republicans who bring up this massacre to me. They don’t deserve any patience.

This issue of child massacre should be juxtaposed with the battle for abortion rights, highlighting the profound hypocrisy of the devil’s Christians who deludely use their religion to justify protection of fetuses while allowing living children to be killed. To take it further, voting for anti-abortion candidates is tantamount to voting for bloodstained hands anti-gun regulation legislators and governors. They are two sides of the same coin.

While employees at Amazon and Starbucks win historic unionization campaigns, the “populist” wing of the GOP has been noticeably silent.

Over the past few years, a small but highly-visible band of Republicans have publicly declared their intention to transform the GOP into a ​“worker’s party.” Sens. Marco Rubio (R‑Fla.), Josh Hawley (R‑MO), Ted Cruz (R‑Tex.) and Tom Cotton (R‑AR) have all embraced versions of this vision, part of a high-brow attempt to divorce the party from its sole adherence to pro-business conservatism.

On election night 2020, Hawley — who was elected to the Senate in 2018 after running a relatively conventional Republican campaign—declared that the GOP was ​“a working class party now. That’s the future.” Cruz and Cotton have since echoed Hawley’s populist rhetoric, the former blasting Democrats as ​“the party of the rich” while claiming for Republicans the mantle of ​“the party of the working class.”

There has been some movement on the legislative side, too. Early last year, Cotton and Sen. Mitt Romney (R‑UT) introduced legislation to raise the federal minimum wage from $7.25 to $10 an hour. Hawley’s personal crusade against Big Tech — which attracted bipartisan support before he refused to certify the 2020 presidential election and supported the insurrectionist crowd outside the U.S. Capitol on Jan. 6 — is, on its face, anti-monopolistic.

But in reality, a few policy gestures aside, their rhetoric hasn’t lived up to the hype. In recent weeks, as American workers have won a string of significant victories — organizing Starbucks coffee shops across the country and unionizing an Amazon warehouse for the first time in the company’s history — this group of supposedly ​“pro-worker” Republicans have been handed a prime opportunity to speak out in support of these organizing efforts. Instead, they’ve been silent.

This reticence is particularly notable from Rubio, who already supported one Amazon union drive. Last year, when workers and organizers in Bessemer, Alabama, tried unsuccessfully to form a union at a local facility, Rubio penned an op-ed in USA Today effectively endorsing the efforts, writing that Amazon’s corporate behavior was ​“uniquely malicious” — a notable stand for someone who once warned that unions threatened to ​“destroy industries their workers are in.” But when it comes to the successful campaign at the JFK8 Amazon warehouse in New York, Rubio has kept mum.